I recently spoke to an artist from Jozi now in Cairo, making art. The complexities of creativity on the continent, soon took precedence over what the interview had initially been envisioned for. This is how it all went down…

Let’s start off with how a South African Jo’burg based artist lands up in the capital of Cairo, painting a mural?

(Peter Mamnes): I came to Egypt because I wanted to learn about civilization. I thought it would be an interesting place to make artworks and get new ideas. I started learning about the history of Egypt, and it is the history of the world because all of civilization comes from the ancient Egyptians. I found new ways to express myself symbolically, by learning something about hieroglyphics, the beautiful way the Egyptians found to write down ideas with multiple meanings.
Written language is very limited compared to hieroglyphics. The fascinating way that symbols can hold so many meanings that entails an entirely different way of thinking.
I came to Egypt to start a completely new project from scratch with no preconceived ideas and imagery. I found so many patterns and images from the layered history of Egypt. 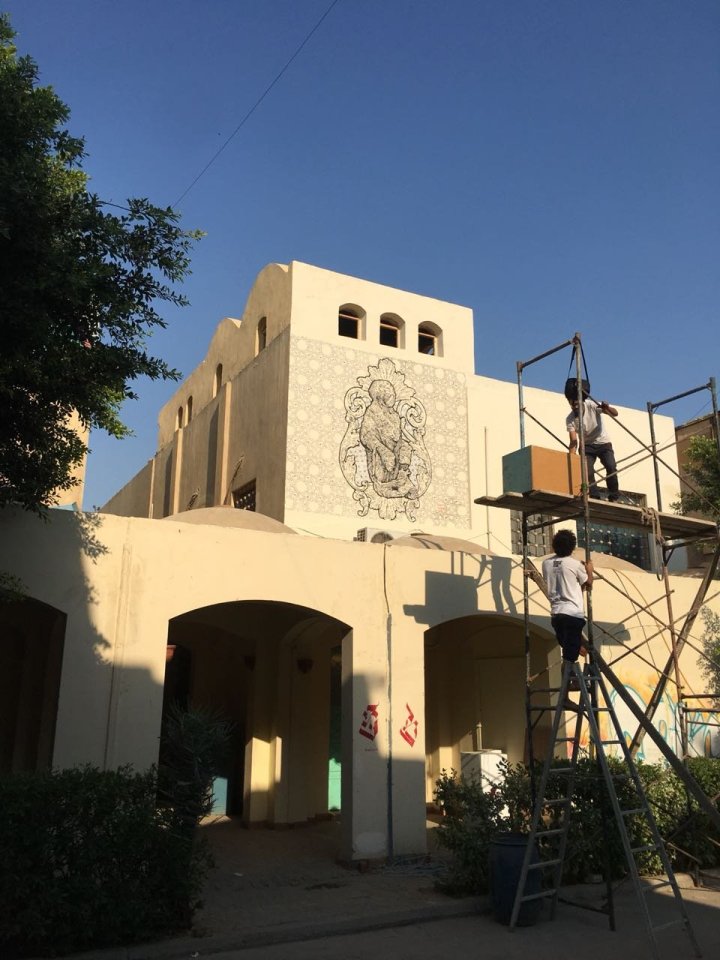 Could you speak a little about the concept behind this work & how that came about?

I found the baboon mummy in the Cairo Museum. The Ancient Egyptians mummified all kinds of animals because they believed the animals had some sort of significance, the baboon was a symbol of learning. The god Toth was either represented as an ibis or a baboon, he was a very significant god to the Ancient Egyptians. The ideas we have of Gods also is a modern idea, the Ancient Egyptians believed more that certain “gods” represented principals of nature.
I decided to create my own visual language, as a type of hieroglyphic. I have assigned the symbolic value to the image of the baboon mummy as “bureaucracy, old ideas”.
The motif behind the baboon is from the coptic Christian area of Cairo, it represents, which is a more western motif, the pattern behind all of it is a arabesque pattern.This artwork represents a clash of cultures, the baboon mummy in this artwork is to criticize or highlight the idea of the everlasting and overpowering effects of bureaucracy. Let me just say that in Egypt today there is no freedom of speech, one has to find symbolic ways of getting your ideas out there or face arrest and jail.I believe that in our society in South Africa that symbols can speak much louder with more nuance to combat societal issues and make people think in tones of grey instead of black and white

How, if at all, has your time in Egypt affected your process?

I’ve been forced out of my comfort zones, I’ve had a very hard time and I was in an incredibly dark place, I almost lost my mind. It was a perfect storm of circumstances that pushed me into insanity. I found a way out and I worked on the ideas which you will start to see in my work, those ideas saved my life.

The artwork is telling a story, it is not stating obviously in a one dimensional way, I try to layer meaning. The artwork should be of multiple dimensions, that’s the beauty of images. This is important as time and history gets rewritten what we think today is the norm and the heroes of today might be the villains and heresy of tomorrow.

That’s a very interesting statement; I wonder how much of that relates to the choice of subject you have decided to use for this mural. On one level this piece speaks of the historical symbolism of this mummfied baboon god which carry with it positive connotations, but on the complete opposite end of this spectrum, monkeys, baboons and primates have taken a very negative connotation especially in relation to people of African decent. Have you factored in this socio-political shiftting of this work, seeing as you are a white artist and that its rich use of symbolism would be geared more towards a visually literate audience?

I think if you want to find racial issues, then you’ll see it everywhere and in everything. I prefer to not think in a one dimensional way, there are more dimensions than that of race. Race is a very effective device used by our current government to divide and conquer, I won’t fall into that trap. The Ancient Egyptians are claimed by Europeans as European and by sub sahara Africans as African. This is a modern notion, ideas of distinct races did not exist in ancient Egypt, the idea of a nation state did not exist in ancient Egypt either. The entire north [of] africa was peppered with small villages especially around the Nile, we call them Egyptian but it is not so simple. I think making claims about Ancient Egyptian race is pointless and silly and I think we can learn a lot from that idea.
I also find it interesting that the negative racial connotations imposed on black Africans which I am alluding to apoear to be aspects of the socio-political African narrative which both yourself and the country you find yourself in now, are somewhat separated from. This makes me wonder about how you, as a white South African, see yourself in the contemporary African arts landscape?
I am African, my work deals with contemporary African issues, but Africa isn’t isolated either, the same issues are global issues.
I don’t think that my race gives me the right or prevents me from using my mind to express an opinion and I don’t believe my artwork should be judged by the color of my skin, unfortunately it does get judged by just that. I can’t change people’s opinions and their focus on such issues.I’ll make art and say what I have to say, if it offends anyone then so be it. 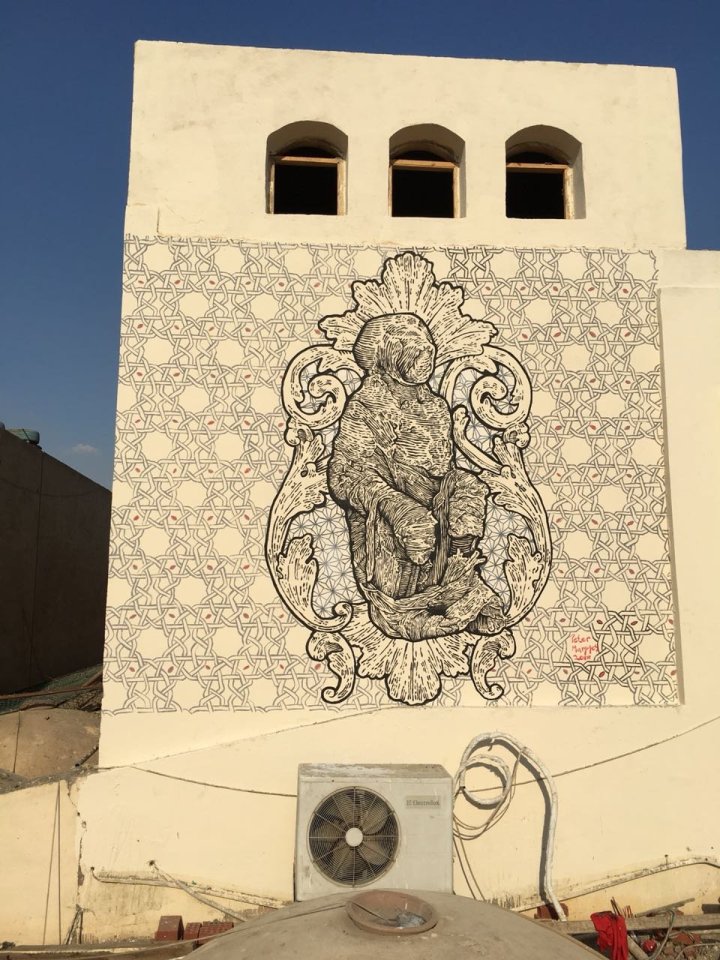 I guess this ties into your statement on censorship. With artists in parts of Africa being muzzelled creatively, as you’ve mentioned earlier. Where would you say South Africa lies in the spectrum of creative freedom of expression?

We don’t want to live in a world where words and images get you thrown in jail. You should be able to say anything and paint anything. If it offends you then make your own artwork about it or say something about it. It’s scary when the government steps in to censor anything, a quick slippery slope to totalitarianism.

Thats a very interesting take on things. What then would you say are some of the key issues that contemporary artists, especially those from the continent, are or should be commentating on?

I believe artists should be more introspective, critical of current conditions, current leaders and governments. South African artists especially need to look at what is happening right now, the problem is that the current leaders foot the bill and why would the artist bite the hand that feeds them?

Have you noticed any similarities or differences in the artistic subject matter choices from artists both from Africa and other parts of the world?

We are part of a global community and ideas get spread around, there are many similarities, especially in photography. The mall galleries with their slick and shiny approach to art are taking over the entire art scene. Removing the social context for more commercial art. I think africa is producing really exciting stuff, but in an international context I think there’s still a fetishisation of Africa as the cliche dark continent.
On that note having traveled through East Africa, it’s hard to find a single art shop or even brushes in some African countries. It makes it hard for an artist to develop when there’s absolutely no support whatsoever

From your earlier response, you found it insulting when I brought up a racial context to your work; while ýour work has no direct racial context, given the global switch towards the left, would it be fair to say with African-ness at risk that this would be a key subject of works by indigenous artists?

The notion of fascism and totalitarianism is always attributes that are associated with the right, but the left is very capable of doing the same, we mustn’t let ourselves become totalitarian using the moral high ground as ammunition. I’m not sure what you mean by indigenous artists? What do you define as indigenous? My family has been in South Africa for 5 generations, I am African, I’m definitely not European. I think the notion of nationhood and tribalism won’t hold much longer, we are in a new global Era, at some point all people migrated from somewhere to somewhere else. African-ness is a mindset, I don’t think painting a baboon mummy in Cairo, Egypt is challenging that.

I used the word “indigenous” rather than African or black in reference to people, for that very reason that I aimed to include people of all races and creeds into that question. This usually becomes problamatic because there is a tendency to identify as European or Asian first regardless of how many generations of blood ties there are to the continent.

At the end all of Western and Eastern culture is derived from the Ancient Egyptians in any case.

If; as you say; your mummified baboon mural won’t make much difference on a grand scale, would you say there is any form of art that can make a greater difference?

I make artworks for beauty, I want to spread beauty around, there are different forms of beauty, even the grotesque can be beautiful. I think struggle art and political art makes a difference, but it’s one dimensional most of the time and like I said very particular to a specific time and place.

What is it you creare art for?

I’ve got an urge to create, I cannot keep still and do nothing. I have to make art, there’s nothing else in this world for me to do, and it completely fulfills me on every level. At times its like meditation and at other times its pure problem solving and dealing with frustration.
I like solving the problems posed by making an artwork, conceptually and skill wise.

Have you noticed any kind of shifting in your approach to art making since travelling?

So much, it’s exciting to see other societies and culture. It gives one perspective, the art scene is very different in every country I have been. South Africa can be very insular and corrupt with art politics and racial issues, and it’s good to experience something outside of it.

What would you say the future of African art is, & how do you see yourself in that sphere?

The future? Who knows what the future holds but I think the novelty of African art will be well worn in a very short time, but for the time being it’s exciting and different.
Homogeneous is the global future unfortunately.

This was without a doubt a very censored interview but from the conversation I did have with Peter Mammes, there is clearly a lot more to this topic that I for one would like to delve into. Here’s hoping we manage to have a second enstallment of this conversation.

I'm a hat wearing creative who enjoys grappling with this world's many forms of expression. This blog is an excursion through this Funky Mad Hatter's mindscapes View all posts by The Funky Mad Hatter

This is a text widget, which allows you to add text or HTML to your sidebar. You can use them to display text, links, images, HTML, or a combination of these. Edit them in the Widget section of the Customizer.
Loading Comments...
%d bloggers like this: